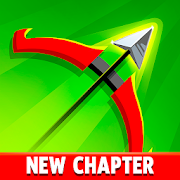 archero is a action game by Habby where you play an archer making there way through various rooms, shooting monster and leveling up. first thing you notice about the game is that it uses a simple control scheme. you move with the single joystick and the only way to fire arrows is to stand still. this make each room almost like a puzzle. were can you stop to take shots, should you move to avoid enemies or wait and let them come to you etc. this combined with some random event level generation make every play through a bit different.

as you progress through levels you gain currency that also works as experience and as you gain enough you level up and get to choose a perk. you get a choice of three and can range from buffs to your stats like attack speed and health up to shields and arrows that bounce off the walls or have status effects. since all of these stack and can be obtain multiple times it can lead to some wild combos. however That being said most items are surprisingly well balanced. after all you may be firing out a ton of arrows that  burn, poison, freeze, and ricochet between enemies but when you are trying kill a enemy around a wall and you cant get line of sight on while several others are spraying projectiles every few seconds its a very really possibility that you might get hit with a  stray bullet and fail.

in between runs you have two options to upgrade your archer including items gained randomly through play and a random upgrade system both of which require currency and materials from obtained by playing the levels. As of writing this I haven’t got many items or upgrades but the few I have while small do add up. small boosts to health or damage might not seem like much but when you barely make it out of a room after getting blind sided by a skeleton throwing bombs you’ll be happy you upgraded your armor.

all this being said the are a few issues that I feel should be kept in mind. first off the game is very repetitive. you go in one direction fight the same enemies and while there is variations in lay out of rooms you do get a sense when they will throw stuff at you. even random event that occasionally happen give you the same options with little variation. so this game is much better in small bursts rather then long play session.

the second thing worth mentioning is it has a lot of the usual monetization methods mobile games use. it has an energy system that gives you only five tries before you have to wait. it has a special paid currency (gems) that you can either purchase or hope to get through random chance while playing that can give you benefits like revives and such. all of this and it still has advertisements. now I understand why mobile game dev do this but I also know a lot of people (myself included) don’t care for it much.

the final thing that I feel is worth mentioning is that while the game can be played offline some things cant be accessed if you are not connected to the internet. for example I was in my car waiting to pick some one up and I was playing the game. I had a really good run and almost got to level thirty when I got blindsided by an enemy and died. now I was given the option to spend gems to revive. I had enough and decided to do so. however when I tried to use them I got a message saying there was a connection error. since you only have ten seconds to get a revive I lost not only my chance to use a revive but all the progress I made up to that point. needless to say I was not very happy with that.

all that being said the game is fun in short bursts and is a novel concept and a rough-like feel that i enjoy. if this game sounds like something you would enjoy you can try it free on the google play store